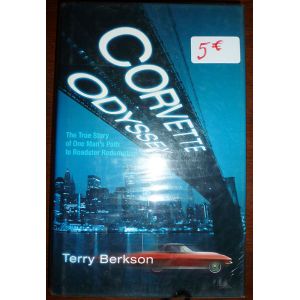 Corvette Odyssey: The True Story of One Man's Path to Roadster Redemption

It was a car fanatic's nightmare. While Terry Berkson was visiting his newborn son at the hospital, his '63 Corvette-a gift from his late father-was stolen off the streets of Brooklyn.
Berkson didn't have theft insurance, and he couldn't get over the loss. Detectives wrote his car off. It's been chopped up for parts, they told him. He would never find it. His wife and his sister-in-law told him he was crazy. But he didn't give in-he posted reward notices and cruised neighborhoods where he thought a stolen Corvette might pop up.
In his incredible search, he was aided by an unlikely coterie of understanding officials, sympathetic car thieves, as well as repo men, bus drivers on the lookout for him, and desperate cases who wanted to help him in unexpected ways, like the woman who claimed she had seen the car, and who was wearing almost nothing when he showed up to talk with her. He plunged into the secretive and dangerous world of "chop shops," where cars are cut down to nothing and sold for untraceable parts. He lurked in the dim corners of New York's most secluded hiding places, like "King Kong's Cave" in the Bronx, where stolen cars are abandoned and set on fire. He learned how professional thieves plan and pull off grand theft auto, and he finally located his car-but what happens when he does is both terrifying and exhilarating.
An original blend of philosophy-why do we love our cars the way we do?-the nuts and bolts of crime, urban adventure, and the underbelly of America's car-crazed culture, Corvette Odyssey is sure to find a place on the shelves of auto fans and lovers of a fine tale well told.